I’m back in writer heaven – the Tyrone Guthrie Centre in Annaghmakerrig, Co Monaghan. Nearing the end of my week’s stay, it’s time to put down a few words.

This residency is the second funded by the Agility Award I received from the Arts Council of Ireland. With just one more research trip to the Chester Beatty left to happen at the end of next month, I can say that I’ve truly put the bursary to good use.

This week, the many months of online research & lectures, followed by the research trips and my stay at the River Mill in early June, are beginning to re-form in the notebook; and even in fourth or fifth drafts in the ‘Chester Beatty’ folder on the laptop.

I’m staying next to the Big House, in the Stewards House – downstairs accommodation that the recovering knee and I appreciate! I have a separate living area with a desk. In the large airy bedroom that looks out to the lawn – and beyond it, the lake – there’s a shelved area by the lovely metal-latticed window that I’ve made my notebook area. The desk in the sitting room, facing a wall, is where I am now at the laptop: the editing suite, as it were! 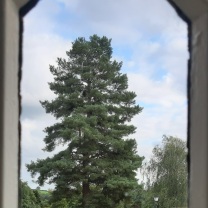 This way of working really suits me. I usually keep the notebook work separate; but this being Annaghmakerrig, I’ve really noticed how setting aside ‘notebook’ time and ‘editing’ time actually focusses the mind and concentration on each specific act of writing.

In my naive prescriptive, pre-Annaghmakerrig, way I had decided that I’d try to get 20 no-thinking-just-writing poems in the bag before I leave here tomorrow. Of course, that didn’t work out! BUT, within two hours of arriving I had completed a submission for a mentorship. And since then, there have been submissions to competitions – including two brand new poems – and an anthology. I spent nearly a day bringing a poem that has been in my head and notebook for nearly two years to the laptop. At nearly 90 lines it’s no longer suitable for a competition I had earmarked, but now I have extra time to review it for a couple of months before sending it out into the world. (Wish us luck!)

There has been admin stuff & emails – we never really escape those, do we? Also, I’ve been reading around this poetry project: catalogues, digital material, and a small Book of Hours. It looks like I’ll go home with 11 new drafts – some of them ‘nearly there’.

Those of you who follow my meanderings on this website know that there’s so much more to ‘Annaghmakerrig’ than the work we put in. This stay coincided with Ireland’s Culture Night 2022. The Tyrone Guthrie Centre took part for the first time. We artists, singers, and writers were a part of it all. Such a joy!

It has been a truly wonderful week. I’ve worked hard. But I also found a bit of time to begin reading Lucy Worsley’s biography of Agatha Christie – the perfect antidote to writing poetry! And music, of course. Lots of music. Bach is providing the backdrop as I write this post.

The company has been varied and stimulating – such conversations and discussions! And always, always always, the shortcut that comes when creative people are together. An innate understanding that precedes anything articulated. Thanks to all my fellow residents. I needed this special week, and the gift of your fellowship.

My thanks too to the Centre’s director, Dr Éimear O’Connor, for the invitation to participate in the Culture Night event and to all of the staff who look after us so well. I leave you with some autumnal photos and two other images – Lavina’s miraculous tiramisu, and the alluring Ariel who lives here – dropping by just when you need a purr. In fact – and I’m not making this up – she just appeared at the window as I typed her name! 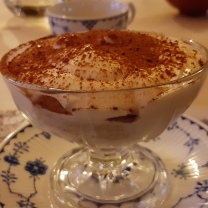 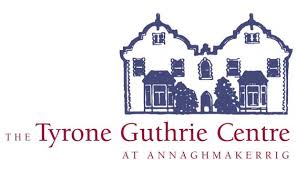